Uuuug.  You know when you have one of those days where everything takes twice as long to do as normal and its like your tongue and your mouth decide they don’t like each other and start to work independently instead of as a team?  Its one of those days!

So, I am currently reading Nicci French’s latest book – Friday on My Mind.  Nicci French is a husband and wife writing team that for years wrote stand-alone books but now they have this series with the main character being Dr. Frieda Klein.  This is the fifth book in the series.  I have to admit, I didn’t really enjoy the first book Blue Monday, but when I picked up the second book, Tuesday’s Gone, it hooked me in and I began to really enjoy the character.  You get to know Frieda very slowly and I think maybe this is why I was hesitant about the first book.  She is very cool and reserved and it takes a long time to get to know her.  She has been hurt, has had a traumatic youth and is wary but yet at the same time has this resilient strong core.  She can stand on her own two feet and look after herself quite nicely, thank you very much, but when she occasionally lets someone in, just a little bit, to help her, the reader gets this warm, cosy feeling.  I am currently on page 86 and will probably finish it sometime this weekend.  I would recommend this series to anyone who enjoys mysteries/psychological reads.

I also accumulated a few books this week.  I had placed an order with Book Depository and received the new release by Elly Griffths called The Woman In Blue.  This is the Ruth Galloway series and is an automatic buy for me.  I love this character – she is down to earth, just a regular woman, but so strong and independent at the same time.  This is the sixth book in the series and I highly recommend these books.

My second book in the order is a classic – Oliver Twist by Charles Dickens.  This is in the Penguin cloth-bound edition (I am just loving these cloth bound editions).  I am not sure exactly when I will actually read this book but hopefully sometime this summer.

My last book is the new release by James Oswald called The Damage Done.  Again, this is a psychological thriller/police procedural/mystery.  This is the sixth book in the series set in Edinburgh.  I really like the main character and there is a nice sense of humor in these books also.  I have read the first two in the series but I really need to get on to the next ones as I am now four behind!

It is my sister’s birthday today and we enjoyed a nice lunch out and a visit to our local bookstore – if you can believe it though, neither of us bought anything! I don’t have any new releases coming out for the next few weeks that I am interested in so I am going to try to get through some of the books on my TBR shelf.

Hope everyone has a good weekend.  Gwen 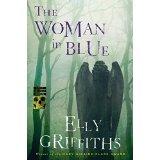