Pigs in Clover:  Or How I Accidentally Fell in Love With The Good Life 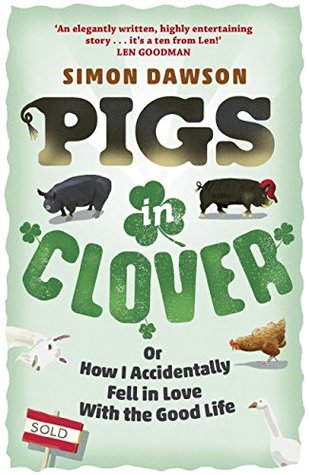 I listened to this book in audio form and I have to say that it was the best audio book I have ever listened to.  I listened to the majority of it while I was working out on the treadmill and it was the first time in my life where I actually could hardly wait to get to the workout room in my building so I could hear more of the story.

This is a memoir about a husband and wife who leave London to live on a smallholding (in Canada we call them acreages) in Exmoor England, which is located in the south west part of the country.  Simon was an estate agent and his wife, Debbie was a solicitor.  One New Year’s Eve after several (many?) drinks, Debbie confides in Simon that she can’t take living in London anymore and being a solicitor and she asks him whether he would consider moving to Exmoor and getting some animals and being what we call in a Canada, a hobby-farmer.  They are at a New Year’s Eve party where the music is very loud and he cannot hear what Debbie is saying (plus the fact he has had quite a few drinks).  All he hears is the word London and agrees to whatever Debbie says.  The next day he finds out what he has agreed to.

The book goes on to tell the story of how he and his wife became totally self-sufficient farmers doing everything from raising and butchering animals for the meat, selling eggs, making cheese and wine, and eventually holding courses on these things.  They had pigs, boars, horses, goats, chickens, turkeys, geese, sheep, and dogs on this smallholding and all the adventures that come with them.

Part of what made this book so wonderful was the humorous writing style of the author and the excellent job that the narrator did of the audio book version.  Ben Allen was the narrator and did different voices for Simon and Debbie.  If was very reminiscent of the Wingfield plays where the actor does all the different voices for the characters.  A sequel to this book is also now available and it is entitled “The Sty’s The Limit”.

Five stars out of five on Goodreads.