Marjorie Hart has detailed in this memoir her experiences of her and her girlfriend, Marty Garrett, being the first female pages at Tiffany in New York City during the summer of 1945.  Marjorie and Marty were born and raised in Iowa and during their summer break from college, they decided to go to New York and find summer jobs and have some excitement during the final year of World War II.

They had initially hoped to get sales clerking jobs at one of the big department stores such as Lord & Taylor or Saks Fifth Avenue, however, they were already fully staffed by the time the young women arrived in New York seeking jobs.  With a reference from President Roosevelt’s public relations expert (an old friend of Marty’s father), they walked into Tiffany and landed themselves jobs.

This book details Marjorie’s experiences, the highs and the lows, of working at Tiffany that summer, touring the city’s attractions, being in Times Square on V-J day and what life held in store for her and Marty after their adventurous summer in New York.  It was definitely a simpler time, which is ironic when you think that there was a world war going on. 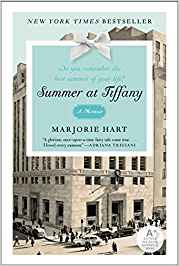 Synopsis: Operation Angus is the third book in the Angus McLintock series with the first being The Best Laid Plans and the second book, The High Road. In Operation Angus, Angus is still a Member of Parliament in Canada and is now the Minister of State for International Relations. The book begins with Angus and his Chief of Staff, Daniel Addison, in London to meet with their international counterparts. Everything is going smoothly until a MI6 agent contacts Daniel and advises him that there is a plot to assassinate the Russian President when he is planning to visit Canada in a few weeks and that MI6 is not planning on intervening with respect to the plot. That leaves Angus and Daniel to save the day (and the Russian President).
Episode 12 of my podcast Books Are My Passion is now available on Apple Podcasts, Spotify and Google Podcasts. In this episode I answer questions that are frequently asked of readers and I talk about specific books that have impacted and made a difference in my life.
Pics from #cozyreadingnight last night hosted by Lauren from #laurenandthebooks. It’s been a few months since we had one of these evenings and it was so nice. I’m glad she ended up skipping the summer version - so much better when it gets dark outside earlier.
New fall mug that speaks my truth 😆
Cozy Reading Night is tonight from 7:00 to 10:00 hosted by Lauren from #laurenandthebooks. I’ll be continuing my read of this classic, The Fortnight in September by R.C. Sherriff.
I got some news this week that I’m very excited about - my podcast, Books Are My Passion, is apparently doing very well on Apple Podcasts.