This is a manga – the first one I have ever read and I loved it!

This is the story of Yaichi who is a stay at home divorced dad of Kana, who is around eight or nine (my guess).  Yaichi had a twin brother, Ryoji, who moved to Canada a number of years ago and is now deceased.  Ryoji had told Yaichi when they were fifteen that he was gay.  Yaichi seemed to accept it but was not comfortable at all with it.  In Japan, the issue of being gay is not discussed and there is no public displays of affection between same sex couples – there is hardly any displays of affection between male/female couples and/or family members, for example, Kana did not know what a hug was.

Ryoji had met a man called Mike in Canada and they had gotten married.  Ryoji has now passed away and Mike is grieving.  One day Mike decides to travel to Japan to meet his husband’s family and to see all the places that Ryoji had described to him.  He stays with Yaichi and Kana and this first book in a duology is the first half of their story.

I really enjoyed this book and the manga format.  The second book in the duology comes out in September and I will definitely read it also. 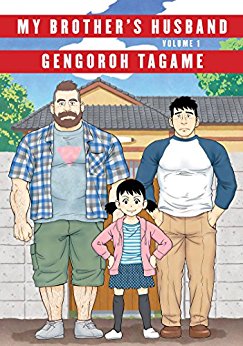