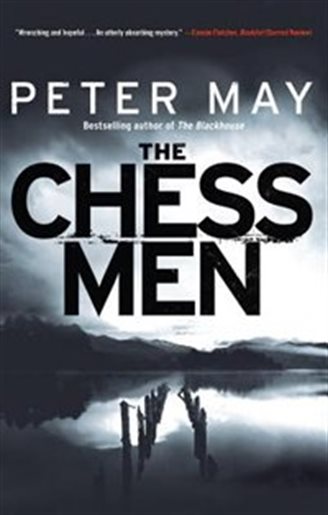 The Chess Men is the third outing in the Lewis trilogy by Peter May.  The main character, Fin MacLeod, has recently accepted a position to oversee security at a local estate; in particular, his job is to catch salmon poachers.  He has been advised by his boss that Whistler MacAskill, an old friend of Fin’s has been poaching on the estate and he wants Fin to ensure that it stops.  Fin follows Whistler one night across the moors until a fierce storm hits and Whistler saves Fin’s life by hauling him into a temporary shelter.  The next morning when they emerge from the cave, their eyes cannot believe what they see – the loch has been completely drained and is just a huge muddy hole.  Even more strange is that in that muddy hole where the loch was is a light aircraft that went missing 17 years ago, along with the skeletal remains of Fin’s friend, Roddy MacKenzie.  A natural weather phenomenon explains where the water from the loch went during the storm, however, the reasons why Roddy MacKenzie and his plane are at the bottom of the loch is another matter.

I have really enjoyed reading this trilogy set in the Outer Hebrides.  I thought they were well written and that there was really good character development, especially with Fin MacLeod.  I recommend anyone picking up this series if you like mystery and atmospheric reads.